Consequences of the United Kingdom’s withdrawal from the European Union n° 5: Implementing the Protocol on Ireland (I) / Northern Ireland (NI)

Trade in Goods – Some Brief Facts 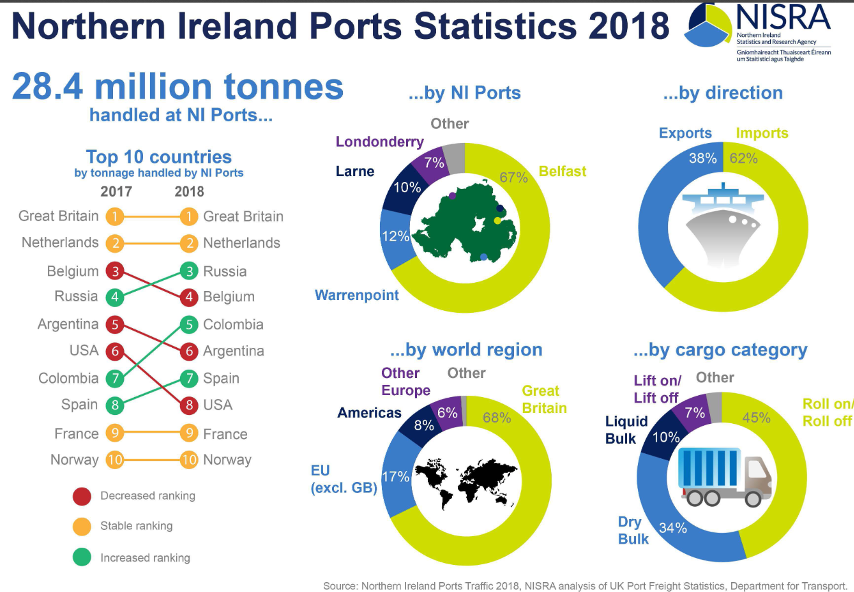 In less than six months’ time, on 1 January 2021, the P-INI to the UK Withdrawal Agreement (WA) becomes operational – whether or not a Free Trade Agreement is concluded. Northern Ireland is where the UK’s Internal Market intersects with the EU’s Customs Union and Single Market. The significance of that intersection lies in the acutely important link between economic prosperity and political stability.

The P-INI expressly recognises the unique circumstances that exist on the island of Ireland. It affirms that the successful culmination of the peace process, the Belfast/Good Friday Agreement of 10 April 1998, should be protected. Its key assumption is that there shall be no return to a hard border for the movement of goods on the island of Ireland. Practically, that objective is achieved by situating a (virtual) border between GB and NI – in the Irish Sea.

The main proposition of P-INI Article 4 is short and straightforward, it states that “Northern Ireland is part of the customs territory of the United Kingdom”. That apparent simplicity has to be read subject to Article 5 which is about customs and the free movement of goods.

The reference to Regulation 952/2013 makes the entirety of the EU Customs legislation applicable in Northern Ireland. The provisions listed in P-INI Annex 2 are EU single market rules and regulations. The combined effect is to introduce what we can refer to for simplicity’s sake as red and green channels for direct transport of goods from GB to NI. Goods that are ‘at risk’ of being moved subsequently to Ireland (whether by themselves or having been incorporated in other products) will be subject to EU standards, customs treatment and EU tariffs – (red channel). The Joint Committee which is to administer the P-INI is to define what ‘at risk goods’ are. Green channel goods that are not ‘at risk’ will be subject to fewer formalities.

The HL Report referred to at the start of this article identifies a number of potential means to mitigate the potential impact of Article 5 on Northern Ireland (at para. 98) including:

However, neither the FTA nor these practical arrangements are yet in place.

On 29 May the NIB-BWG published a detailed paper on implementing the P-INI subtitled: What Business in Northern Ireland needs and why. It sets out almost sixty practical questions about implementing the arrangements. (The paper is a response to the UK Government’s 20 May Command Paper: The UK’s Approach to the Northern Ireland Protocol. ‘Command Papers’ are official publications that set out details about major government initiatives.)

Up to ten ‘Freeports’ are to be introduced within the UK’s geographical territory but outside its ordinary customs territory including, potentially, in Northern Ireland. Freeports are intended to be innovative hubs and attract inward investment. They will have separate customs rules. The UK Government’s Freeports consultation, due to close in April, will now close on 13 July 2020.

Conclusion: A great deal remains to be done in a short time to help businesses that are either in or trading with NI make practical preparations to implement the P-INI.

Disclaimer: This general memorandum may not deal with every important topic or cover all important aspects of the subject matter. It is not intended, and should not be used, as a substitute for seeking appropriate legal advice on specific questions. FLINN stands ready to provide any further information that you may require.